The first thing that strikes you about Kings of Leon's fifth album, Come Around Sundown, is the sheer musical diversity of its songs, which touch on everything from gospel (spiritual, up-tempo rocker "Radioactive"), angular post-punk ("The Immortals," "Pony Up"), bonafide country ("Back Down South"), and even '50s-style doo-wop ("Mary"). The album's huge range proves that Kings of Leon haven't lost the restless, experimental nature that has made them such an exciting band to watch.

That Caleb, Nathan, Jared, and Matthew Followill continue to follow their own muse and refuse to play it safe is especially impressive coming as they are on the heels of Kings of Leon's most successful album to date: 2008's Only By The Night, which catapulted the band into the mainstream. The multi-platinum-selling album debuted in the Top 5 on the Billboard Top 200 chart, hit No. 1 in five countries, sold more than 6.5 million copies worldwide, and earned Kings of Leon four Grammy Awards, including wins for their Modern Rock radio multi-week No. 1's "Sex on Fire" and "Use Somebody" (which led to what drummer Nathan Followill describes as a "surreal and drunken" trip to the podium to collect an award for "Record of the Year" from Ringo Starr). The album's success also led to the band's gracing the covers of Spin and Rolling Stone, performances on Saturday Night Live and The Today Show's summer concert series, a sold-out show at New York City's Madison Square Garden, and headlining slots at Bonnaroo, Lollapalooza, and Austin City Limits festivals.

Any other band would feel pressure going into the studio, but Kings of Leon aren't like any other band. "The funny thing is that Only by the Night was the first album we approached with the attitude of not trying to make a popular record," Nathan says. "We just made the record we wanted to make and it ended up being our best-selling album. So for this new one, I don't think any of us were thinking we had to make a record that would stand next to Only by the Night. We definitely didn't want to go in there and make a record out of fear that it wouldn't be as big."

On Come Around Sundown, Kings of Leon haven't sacrificed any of the rich, anthemic quality that made Only By the Night so appealing. While both albums combine a grand and propulsive rock sound with intimate post-punk moods, the band has upped the ante on the new one by connecting the dots between the blues, classic rock, and gospel influences of the Followill's childhood to the alternative and indie rock Jared introduced them to in adulthood. Come Around Sundown gives the listener a sonic tour of the band's entire career, from the garage-rock feel of their first two albums, 2003's Youth and Young Manhood, 2005's Aha Shake Heartbreak, to 2007's expansive Because of the Times, on which they began to experiment with a shift in sound.

"Come Around Sundown colors in the picture of us as a band, in terms of where we've come from musically," Nathan says. "And I think it took a record like Only By the Night to be so successful to give us the courage to put a song like 'Mary' on the album. It would have been so easy for us to go in there and try to have a record full of just polished radio smashes. In fact, I'm sure that was expected by a lot of people, but I'm glad that when a song like 'Mary' or 'Back Down South' comes on, people will know immediately that we didn't try to capitalize on being the flavor of the month."

Which is not to say that Kings of Leon's newer fans won't love Come Around Sundown. "It'll be neat for people who know us only from our hits because they'll get to hear where we've come from musically," Nathan says. "I think a couple of these songs will turn on newer fans to our older music because it's hard to imagine the band that wrote 'Sex on Fire' is the same band that wrote 'Trani' [from Youth and Young Manhood]. They're songs from totally different worlds. I think Come Around Sundown has something for everyone on it, and I hope it leads people to discover us in a totally new way."

Kings of Leon began to record Come Around Sundown in February 2010, just four months after winding up nearly two years of touring the globe behind Only By The Night. "After our last show in Abu Dhabi, the plan was to take a year off and do nothing, but we got bored," Nathan says. "It was like, 'You guys want to get together and rehearse some stuff in case we have a show?' That always turns into new ideas and it only takes two or three to get us so excited that we think we could potentially start another record." Choosing to record in New York for the first time, the band went into Avatar Studios with co-producers Angelo Petraglia and Jacquire King. "Those two get us as people and as musicians," Nathan says. "If we want to stay in the studio till 4 a.m. critiquing the sound of one snare hit, they're down for that. And like my grandma said, 'If it ain't broke, don't fix it.'"

The band named the album Come Around Sundown after a line in a song called "Small Town" by country singer John Anderson. "Matthew was the one who heard it first and he just fell in love with it because it was so beautiful. Once we started counting how many syllables it had," Nathan says - referring to the fact that all of Kings of Leon's album titles have five syllables - "it was a no-brainer."

RCA Records will release Come Around Sundown on October 15th, 2010. 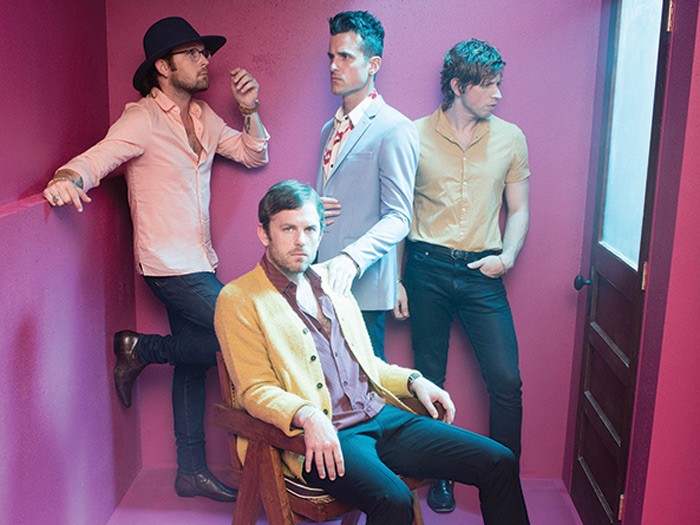